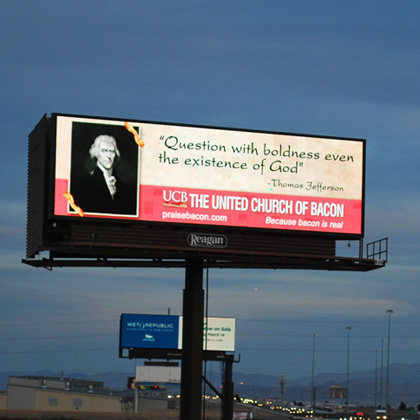 The United Church of Bacon led by Prophet John has placed two billboards in Las Vegas, Nevada to spread word of the Lard and to promote critical thought. The digital billboards are located near the 215 freeway and Jones with spectacular visibility. The view facing east includes the Las Vegas strip, and the view west includes the picturesque Red Rock Canyon park. (pictured)

The outdoor advertisement has a planned run of 2 months and displays the image for 8 seconds in rotation. Featuring an image of Thomas Jefferson it which urges viewers to “Question with boldness even the existence of a god” and is accompanied by a call to action of the “United Church of Bacon” at “praisebacon.com.” “Because bacon is real.”

The quote comes from a letter Thomas Jefferson to his nephew Peter Carr, 10 August 1787 and is undisputed.  The full context reads, “Question with boldness even the existence of a god; because, if there be one, he must more approve the homage of reason, than that of blindfolded fear.” It can be found at the Monticello Jefferson Archives.

Don’t forget to join the church, clergy and donate to any of our networked charities.