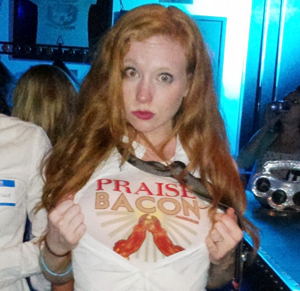 Penn Jillette‘s Bacon and Doughnut Party went off without a hitch. Lots of lucky party-goers were given “Praise Bacon” shirts by the band members during the show.

Hundreds of new members added their names to our roster and started to follow us on Twitter. To all of the newly gained church members, we’d like to welcome you to bask in the glory of our lard. Praise Bacon!